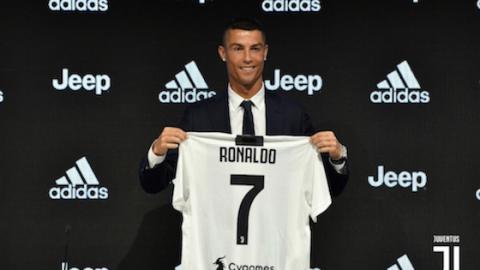 By joining Juve for £90 million, Cristiano Ronaldo has become the most expensive transfer in the history of the club. This huge expense could however be quickly reimbursed.

The arrival of Cristiano Ronaldo to Juve has obviously shaken all of Italy, especially since Italian fans were not too invested in the World Cup (sorry but it had to be said). For £90 million, the Portuguese five-time winner of the Ballon d’Or becomes the most expensive transfer in club history.

But in just 24 hours, nearly 600,000 CR7 kits were sold in Turin. At about £90 each, you can do the maths. Juve does not get 100% of the profits from kit sales of course, so the Turin-based club can’t say that they’ve already made over £50 million. But at this rate, this transfer window madness should soon be profitable.

As a reminder, a call to strike was launched by workers at Fiat, who partially financed the transfer, to protest against such a large expense. The first figures from kit sales should begin to reassure them.