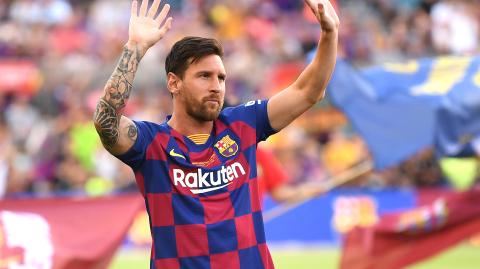 As arguably the greatest player to ever play football, it is perhaps no surprise that Lionel Messi is one of the highest paid athletes in the world.

With his contract coming to an end in the summer of 2021, the gritty details of Lionel Messi's remarkable £135 million per year have been leaked to the press and both Messi and Barcelona have threatened legal action as a result.

Messi at the Nou Camp

Relations between Barcelona and Lionel Messi are at an all-time low, with the political jostling at the club rearing its head on an ugly basis. The possibility of Messi leaving Barcelona came to fruition following their startling defeat to Bayern Munich in last season’s Champions League and ever-since the writing has looked on the wall.

Manchester City were believed to be the club in pole position to sign Messi until club officials on the Barcelona board caved into Messi’s demands and the Argentine agreed to stay for another season.

In committing to Barcelona for another season, Messi was vocal in saying that his love and respect for Barcelona fans was the reason he was staying, rather than any particular wish to stay for footballing reasons.

With results lacking consistency under Ronald Koeman, Barcelona look a club in transition and Messi appears to be angling for an exit from the Nou Camp when his contract is up.

Few sport stars in the world are as marketable as Lionel Messi but the magnitude of his contract has taken the footballing world by storm. On average, the Argentine is believed to be taking home close to £2 million per week–in a deal that sees him far surpass his counterparts Cristiano Ronaldo, Neymar Jr and Kylian Mbappe.

Much of his earnings are on closer inspection, made up from endorsements and existing agreements Messi has in place with sponsors but the financial clout required to sign Messi is huge and the leaking of his contractual details is going to pose the question of who can actually afford him?

It has been the sporting story of the past 12 months and whilst the details of Messi’s contract are now public knowledge, football fans are no closer to finding out where Lionel Messi will go next.

Manchester City are believed to be in the driving seat and the idea of Messi linking up with Pep Guardiola and the resources City have at their disposal makes them obvious favourites.

Other potential suitors include Paris Saint-Germain, who too have plenty of cash reserves but may struggle to keep Messi, Neymar and Kylian Mbappe happy within the same team.

Moves to Asia, the Middle East and America could all be on the cards for Messi who turns 34 this summer and whilst his next move remains unknown, he is sure to be handsomely reimbursed wherever he goes next.