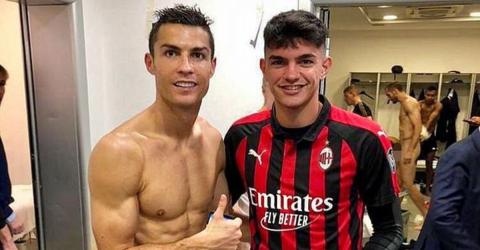 Cristiano Ronaldo is one of the best footballer players of all time and also one of the best paid. And it’s for this reason that lots of users on social media have started to make fun of him recently. Despite all the money the Portuguese makes, some people have become fixated on one detail in one of his latest photographs.

A few days ago, a photo started circulating the internet of the Juventus player with the promising young player from Milan, Raoul Bellanova. In this photo, you can see Chiellini in the background without his kit on, which provoked all kinds of comments.

But there is a lot more to this photo than meets the eye, and other users didn’t just focus on Chiellini in the background but seemed to be more interested in the former Madrid player.

One little detail surrounding his briefs sparked endless jokes and comments, some even calling him stingy and cheap, similar to what happened in the past regarding the Portuguese player’s house. Check out the video above for all the details!

Cristiano Ronaldo ruins his house’s image with his cheapness

When the Portuguese player’s mother uploaded a photo to social media, the way the footballer’s house was decorated has been rather criticised for being in poor taste. Although we can confirm that Cristiano is one of the greatest players in history, his interior design doesn’t really reflect this.

In the photo in question, you can see Ronaldo with Georgina sharing a special moment in the bedroom, but lots of internet users were more interested in what the footballer had on his wall instead. To be more precise, there were several paper clippings which generated all types of comments, some even calling him stingy and cheap.

#celeb#funny
Contact
To ensure that we can best respond to your question, please choose your desired department
No connection
Check your settings