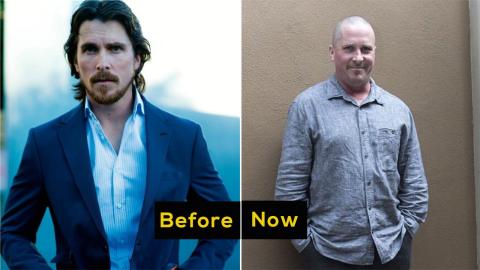 Read the article
By Will Armstrong on December 16, 2018 at 5:35 PM
Last edited on May 16, 2019 at 5:07 PM
Christian Bale ain't a stranger to dramatic fluctuations in weight when starring in a film. You guessed it, the man is back at it again as he piles on an extra 3st 4lbs, starring in upcoming biopic, Vice.

From dropping his weight to a mere 8st in psychological drama, The Machinist to rocking a chunky beer belly in American Hustle, Christian Bale is one of the most well-known actors to have to go through such extreme lengths under film directors' requests. Bale diligently continues to keep up with that reputation, putting on a whopping 3st 4lbs (21kg) to play Dick Cheney, George W Bush's vice president in flim Vice, the story of how he discreetly became the most powerful man in the world to shape modern-day America.

Not only did Bale have to lose and gain weight for his roles in short periods of time, but he also had to undergo strict and strenuous fitness regimes somewhere inbetween. Roles such as Patrick Bateman in American Psycho and arguably one of his most renowned roles as the slick caped superhero in Batman Begins required him to build a strong and muscular physique in order to fulfill the character profile. This time, he has gone the extra mile to bleach his eyebrows and shave his head for his starring role in the upcoming comedy-drama.

In fact, the fourty-four-year-old Hollywood star has really gone all out to play the politician. According to co-star and another famous face, Steve Carrell, Bale even went as far as working to change the shape of his neck in order to ressemble the real Dick Cheney. Carrell, who plays the US Defence Secretary, Donald Rumsfeld, gave a small insight into the measures Bale took to give justice to the role: "Apparently he wanted his neck to be thicker for Cheney, so he’s doing neck exercises to thicken [it]."

Bale often had under a year to transform himself from one character to the next, whether it was to lose a damn good few pounds or to build a Bay-Watch-esque body to perfection. Even the director of Vice himself, Adam McKay highlighted Bale's full dedication to his new role: “What Christian Bale really does is he psychologically breaks someone apart and puts them back together again,” he told Deadline Hollywood.

It wasn't the first time McKay worked with the Batman Begins star. Indeed, the director also saw Bale in action back in 2015 whilst directing comedy-drama, The Big Short. McKay reaffirmed his excitement to have worked with the actor again for the upcoming film: “I’ve never seen someone work so hard at it, and it is hard on him, but really amazing to watch. The second I thought of doing the movie, I knew right away, the most exciting person to play him is Christian.”

Whilst he has done an incredible job undergoing such drastic changes, being fully committed to his acting career, we wouldn't recommend trying this at home!

The upcoming film is scheduled to be released in the beginning of February, 2019.