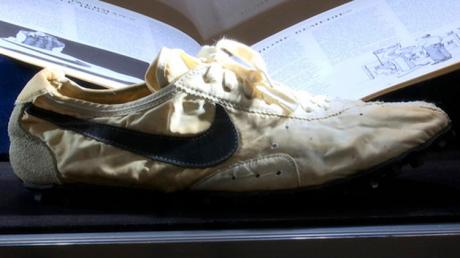 Why Did This Old Pair Of Nikes Sell For Over 0k At Auction?

This pair of shoes, dating back to the 1972 Olympic Games, is one of 100 pairs, all bought by the same Canadian collector.

This is a world record for a pair of trainers. During an online auction organised by Sotheby’s, one of the first pair of trainers ever produced by the brand Nike were sold on Tuesday 23rd July for $437,500, or £353,320.

A model designed for the 1972 Olympic Games

This model of shoe, known as the ‘Moon Shoe’, was designed for American track and field coach Bill Bowerman who was also the cofounder of the brand Swoosh for the 1972 Olympic Game trials in Munich. The pair that sold on Tuesday were the only pair of the 12 that were made to never have been worn and were estimated to be worth between $110,000 and $160,000 according to Sotheby’s.

Buyer Miles Nadal, a 61-year-old Canadian businessman, definitely forked out a small fortune for this unique pair of shoes. He is already planning to put them in an exhibition in his private museum in Toronto, the Dare to Dream Automobile Museum, as per the press statement released by the auction house.

This wasn’t the first time that the collector had been to auction. Originally, the ‘Moon Shoes’ were just one of 100 pairs being sold by Sotheby’s, and Miles Nadal bought the other 99 pairs in the collection last week, for a total of $850,000.

A shoe inspired by astronauts

For a bit of history, these shoes were called ‘Moon Shoes’ because of the similarities between the footprints that this model leaves on Earth and the footprints that astronauts leave on the Moon. Coach Bill Bowerman got the idea for this sole by pouring a rubber-like material in his wife’s waffle maker.

The previous record for a pair of shoes dates back to 2017. A pair of Converse Fastbreak that were worn by Michael Jordan in the 1984 Olympic basketball finals in Los Angeles, which were sold for $190,373 by SCP Auctions.