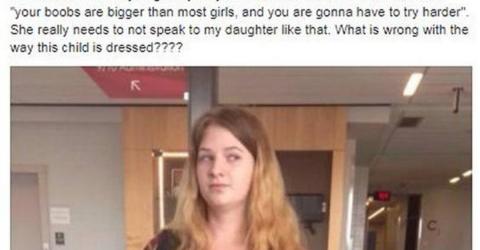 Dress codes in high schools are always a topic of discussion, but sometimes, a lack of understanding prevails. This was the case with a young girl, who has excluded from her class because of her big boobs, even though the clothes she was wearing were completely acceptable.

Unbelievable. In Joplin High School in Missouri, Kelsey Barber was excluded from her classes due to a dress code violation. The 17-year-old young girl was wearing a burgundy blouse which revealed absolutely nothing. And yet, a female teacher thought that her top was inappropriate and told her that ‘bustier women need to wear clothing that covers their cleavage’ and that ‘plus-sized women need to dress accordingly’.

As well as completely humiliating her in front of the class, she was also called to the headteacher’s office, as well as her mother. The high school defended the teacher while her mother completely supported and stood by her daughter.

The mother, Melissa Barber, explained that the teacher had sexualised her daughter, and that she felt so humiliated that she didn’t want to go back to school anymore.

‘I refuse to put my daughter in a situation where her self-esteem is completely destroyed. She is there to learn.’

The story then appeared in all American media and Melissa Barber declared on Facebook that the high school finally admitted that the teacher was not being reasonable.