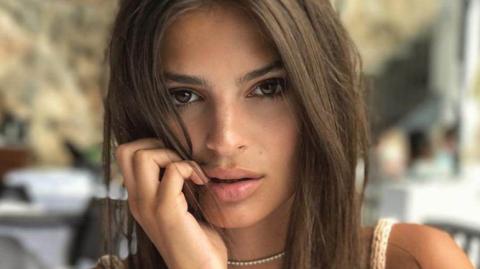 Whilst on holiday in Paris, Emily Ratajkowski seized the opportunity to share photos of her stay on Instagram. She’s always at ease when it comes to stirring things up on social media, and this has been no exception, as she posted several sexy shots that have received a lot of praise.

Accompanied by her husband, Sebastien Bear-McClard, Emily Ratajkowski was taking advantage of Parisian weather for a few days. The model shared a few memories from her holidays on Instagram, which has made her fans go nuts yet again.

Emrata said she had enjoyed having burrata at a restaurant in the capital. However, internet users have focused more on the sexy button dress that the model was wearing, rather than the mozzarella.

On Satuday 2nd June, she also took a photo with a topless pose, covering her chest with her hands and her hair. The model then enjoyed a drink aboard a boat on the Seine, in a weather appropriate outfit for the wonderful weather in the capital. These photos have clearly won her fans over, as they have showered her with compliments. They have actually gotten more than double the amount of likes than the traditional holiday photo of her and her husband posing modestly.