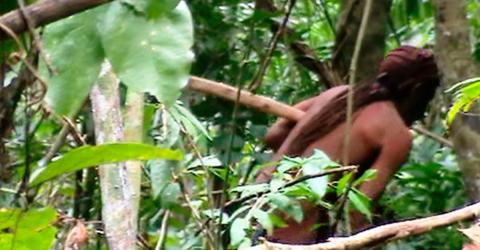 This video reveals previously unpublished images of the Man of the Hole, the last remaining member of a decimated Amazonian tribe in Brazil. More than an ethnological curiosity, he is the living representative of an alarming ecological and societal crisis.

No one knows his name, the name of his tribe nor his language. Some call him ‘The Man of the Hole’ in reference to the 6 foot deep holes discovered in each of his successive homes, intended to trap animals. His other nicknames are the ‘Last Tribesman’ and the ‘Loneliest Man on Earth.’

The last of his tribe

During the 1990s, rumours about the existence of the Man of the Hole began to circulate among the loggers of the state of Rondônia, Brazil. His story is unknown, but according to the website Survival International, he is the last of his tribe. His tribe was reportedly slaughtered by men employed by settlers and ranchers who began to invade the land in the 1970s.

‘In the 1980s, disorderly colonisation, the establishment of farms and illegal logging of Rondônia led to repeated attacks on isolated indigenous peoples who had been living there, in a constant process of eviction from their lands and death,’ says the website of the government protection agency responsible for the protection of indigenous tribes in Brazil, known as FUNAI (National Indian Foundation).

‘After the last attack by farmers in late 1995, this group that was probably already quite small […] became a single person and the culprits were never punished.’ For the past 22 years, FUNAI’s Ethnoenvironmental Protection Front (FPE) of Guaporé has been observing the survivor and planning surveillance actions for the territory where he lives, to protect him against external threats. No contact or communication with him is allowed. Only a few objects likely to be useful for his survival are given to him.

‘We have been able to learn from the camps he leaves behind that he plants maize, cassava, papayas, and banana trees. He also hunts and digs holes about 6.5 feet deep and covers the bottom with sharpened stakes in order to catch food,’ says the Survival International website. ‘He builds houses made from straw and thatch, digs a hole inside the house, possibly to protect himself in case of attack.’

FUNAI recently released a new video of the man, filmed without his knowledge. We see him briefly, chopping down a tree with an axe. This documentation of him is rare, since the man has clearly demonstrated his will to stay away from society. But it can also be used as a promotional tool towards the defence of these indigenous peoples who have been pushed to their limits because of the violent attacks punctuating the conquest of their territory.

Thanks to this video, FUNAI can maintain the order of restriction which guarantees the protection of their land. Without this legal defence, ‘the farmers surrounding the territory would rush to violently appropriate it,’ says the Survival International website. Unfortunately, this man is only one individual among a large number of other tribes facing the same threats. ‘These uncontacted tribes are not primitive relics from a distant past,’ says Stephen Corry, director of Survival International.

‘They live here and now […] and are a vital part of human diversity. […] The terrible crimes that have been perpetrated against this man and his people must not happen again, but countless other tribes that have been contacted are under the threat of a similar fate as long as their lands are not protected. Only a large upswell of public opinion could restore their chances of survival,’ he concludes. 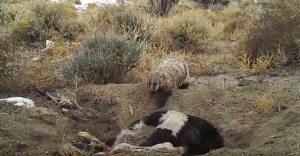