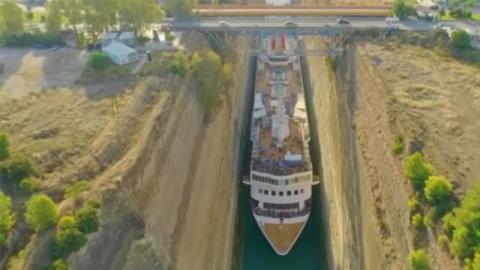 Despite being 22.5 meters wide, last Wednesday, the MS Braemar successfully managed to squeeze through the narrow Corinth Canal, which is 25 meters wide at its narrowest. It has thus become the largest ocean liner in history to embark on this waterway.

Talk about precision! The captain of the cruise ship and his crew managed to make their way between the steep walls of the canal, under the astonished gaze of some 1,200 passengers. This perilous cruise was more than 6.3 kilometres long. For extra safety, the boat was preceded by a tugboat…

The passengers on deck took to social networks to share that they could touch the walls of the trench by simply reaching their arms out.

“Wonderful views and exhilarating. Could touch the trees as we passed by. Congratulations to Captain Jozo Glavic and his crew,” wrote Valérie Hill, a tourist, on Twitter.

This technical feat was immortalized by several passengers. One of them, videographer Christos Kintis, filmed the entire crossing, in time-lapse. His video, which was posted on YouTube, already has more than 57,000 views.

The MS Braemar is officially the largest vessel to have gone through the Corinth Canal. As a reminder, the latter is an artificial waterway, inaugurated at the end of the 19th century. It connects the Corinthian Gulf of the Ionian Sea to the Saronic Gulf of the Aegean Sea. In other words, it's a shortcut that allows boats to reach the Cyclades, bypassing the Peloponnese.