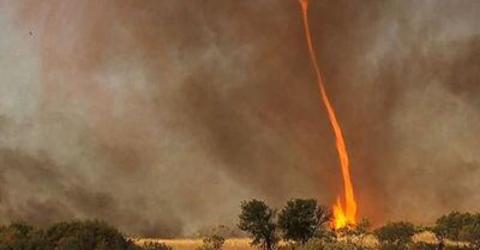 Following the deadly fires in Australia, tornados of fire have since formed and have been destroying everything in their path.

This phenomenon is just as fascinating as it is worrying. Tornados of fire have been raging across south-eastern Australia rife with flames for more than four months now.

A rare but disastrous phenomenon

Also known as ‘firenadoes’, these monsters are currently raging across certain parts of south-eastern Australia.

Several amateur videos have been recorded showing this phenomenon, sometimes from a bit too close. A 12-tonne fire engine has even been overturned by one of these firenadoes and one of the volunteers, unfortunately, lost his life in the accident.

How are they formed?

Lots of things need to happen in order for a firenado to occur. First, the fire heats the air close to the ground and since it is lighter than cold air, this hot air rises and creates a strong current. The temperature difference could then result in a vortex. This vortex then sucks in the gas released by the flames which subsequently catches fire when it comes into contact with the oxygen-rich air at the heart of the tornado.

These conditions have been met in Australia as a result of the multitude of forest fires that have been raging across the country recently. Although they are spectacular to witness, they are also extremely dangerous and it’s difficult to firefighters to do anything to control them. At least 24 people have died as a result of these fires since September and almost 500 million animals have also perished in the fires.