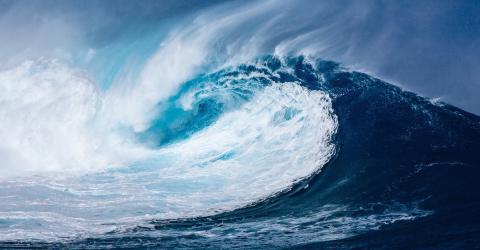 In a recently published study, astrophysicists put forward a new explanation of the origins of the Earth’s water. According to the formation model of our planet that they developed, this precious substance doesn’t only come from asteroids, but also from the cloud of gas at the origin of the birth of the sun, the solar nebula.

Before we drank it, drew it from the earth or navigated on it, the water that is so precious to us literally fell from the sky. From clouds, of course, but also, before that, from an area beyond the limits of the earth's atmosphere, space. This is what scientists say in a study published recently in the Journal of Geophysical Research: Planets.

According to a team of researchers from the School of Earth and Space Exploration and the School of Molecular Sciences at Arizona State University in the United States, the precious blue gold that fills our oceans today has its origins not only from matter that came from asteroids, but also from gases from the formation of the sun.

To develop this new theory, scientists developed a whole new formation model for our planet. According to their work, billions of years ago huge water-rich asteroids began to moult and became planets. These planetary embryos which were somehow imbibed like sponges then began to collide with each other.

Earth in the process of fusion

Still according to the model developed by the researchers, these violent encounters would have ended up turning the largest of these planetary embryos into a vast ocean of magma. This expanse of molten matter would eventually have given birth to the Earth.

Covered with magma, this sketch of our planet would then have attracted gases to it from the solar nebula, the gaseous cloud from which our star was formed. Among these substances were noble gases, and hydrogen. Hydrogen, which would have followed… quite the complex path!

By a process called ‘isotopic fractionation,’ the gas would indeed have plunged towards the centre of our very young planet, whose richness in iron would have made it possible to keep it there. Then an isotope called ‘heavy’ hydrogen stayed on the surface, also known as deuterium.

The end of a myth

This process would have resulted in enriching the oceans with deuterium. A fact attested to today by scientists, but that many attributed to another phenomenon. ‘It's a bit of a blind spot in the [scientific] community, when we measure the deuterium hydrogen ratio in the ocean water and we see that it's close to what we see in the asteroids, it's always easy to believe that everything came from asteroids,’ says one of the co-authors of the work, Steven Desch, professor of astrophysics at Arizona State University.

A theory now refuted by the researcher and his colleagues. ‘In every hundred molecules of the Earth's water, there is one or two that come from the solar nebula,’ says lead author of the study Jun Wu, from Arizona State University. This revelation about the origins of the water that covers our planet today is a great advancement when it comes the identification of other planets that could potentially host life.

‘This model indicates that the inescapable formation of water could probably occur on any large enough exoplanet in the extrasolar systems,’ said Jun Wu. ‘I find it exciting,’ concludes the researcher enthusiastically. An excitement that everyone can now also share... the Earth’s first shower!