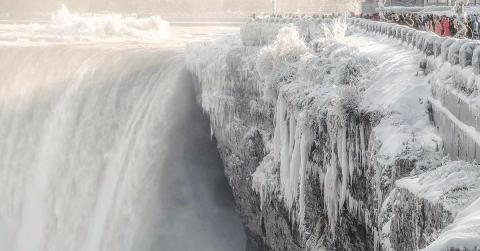 Canada and northern parts of the USA seem a lot more like Antarctica as of late. Residents of these parts may have hoped that the sub-zero temperatures and extremely cold conditions would be left behind in 2017, 2018 has proved that the cold snap is not looking to let up any time soon. In fact, certain states and cities like Omaha, Nebraska have seen record-breaking temperatures that have existed for 140 years.

Despite the negative effects that incredibly low temperatures such as these often bring, there have been a few unusual and quite interesting consequences as well. Particularly this is the case with Niagara Falls, the famous waterfall bordering between the USA and Canada. Due to the sub-zero conditions, the cascades on the border between neighbouring countries have partially frozen, bringing about astonishing ice sculptures.

Since the beginning of the new year, social media has been blowing up with images captured by visitors of the falls. The picturesque landscape has become even more of a tourist destination since its freezing over: ‘I came here in the summertime four years ago,’ said Zieong Zhang, a visitor who travelled 7 hours to visit the falls. ‘It was good, but it wasn't like this. This is just outstanding, with all the snow, and the trees coated like sugar.’

The falls are still flowing

Contrary to what some photos and videos may suggest, the falls had not completely frozen over. With over 3,000 tonnes of water falling every second, it would require a much more intense and prolonged cold to completely stop the falls from moving. This has only occurred one time in recorded history when an ice dam formed and blocked the falls from spilling.

This isn’t the first time Niagara Falls has experienced a phenomenon of this kind. In 2015, North America experienced similar winter conditions and the falls saw up to 90% of itself transform into massive ice sculptures.