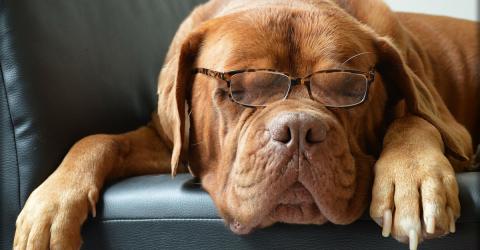 Dogs would surely stop wagging their tails when they hear this: according to a study, man's best friend isn't as clever as we may think... Such is the conclusion from an analysis of 300 studies on animal intelligence.

This new piece of news isn't exactly greeted with open arms (and paws)! The study published in Learning & Behavior magazine claims that our four-legged friends aren't as intelligent as we had previously thought.

The least that can be said is that these researchers made a thorough investigation in order to back up their affirmation. Indeed, British psychology specialists used over 300 studies to analyze their findings in order to compare the abilities of dogs to those of other animals.

The species analyzed were from multiple groups : carnivores, domesticated animals or those who hunt in packs: dogs, wolves, but also bears, lions or hyenas. From these hundreds of publications, scientists from the University of Exeter and the University Canterbury Christ Church have found many cases of "over-interpretations" of canine abilities.

'Throughout our work, we found that many of the studies in the field of canine cognition were trying to 'prove' just how intelligent dogs are,' explains Stephen Lea, co-author of the publication and a professor at the University of Exeter.

'Dogs are usually compared to chimpanzees - thus, every time they 'win', it adds to their reputation as something exceptional,' laments the scientist, who goes on to denounce the biases in his colleagues' work.

'In all cases, without exception, we have found comparisons with other valid species, that perform just as well as dogs do with [certain] tasks.' These tasks vary in nature from sensory, spatial or social functions, even testing the disposition of self-awareness.

Not so exceptional after all

'Taking into account the three groups [that are] domestic animals, social hunters and carnivores, the cognitive abilities of dogs do not seem exceptional,' affirms Britta Osthaus of Canterbury Christ Church University. The tumbling down of this myth will surely disappoint the masters that once admired the prowess of their domesticated tail-wagger.

'We do not do dogs a favor by expecting too much of them. Dogs are dogs, and we need to consider their needs and their realistic abilities when thinking of how to take care of them,' concludes Britta Osthaus. By overestimating them, we would really be making them 'work like a dog'.