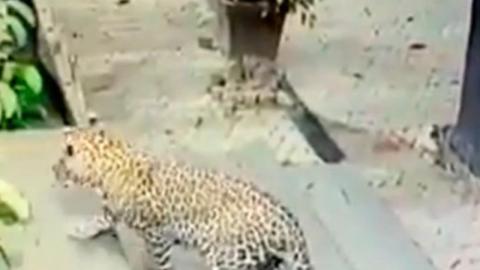 This footage of a starving Leopard attacking a dog went viral on social networks because of its incredible ending, which continues to shock the Internet.

Yet another YouTube video has gone viral. It shows a hungry predator waiting for the opportunity to attack a dog and devour it. But you won't believe how things turned out.

The events occurred in Mumbai, India. Due to the city's exponential population growth, there's been a progressive reduction of wild animals' habitat, so it's not uncommon to spot them in the city looking for prey to feed on.

The video shows a leopard waiting, next to some bushes on a street, for an opportunity to pounce. It set its sights on a small stray dog ​​that was napping on the street, and eventually attacked it.

The entire scene was caught by street security cameras. The video, which was later uploaded to YouTube, went viral on social networks in no time. You can perfectly see the leopard approaching the dog to bite it.

But the brutal attack didn't end how the leopard expected it to. The little dog fought back in spite of how much bigger its predator was. In fact, the dog's reaction caused its attacker to flee the scene!

The attack only lasted a few seconds, but everyone who's seen says it was a shock. Don't miss out on this incredible footage, which you can watch in the video above.