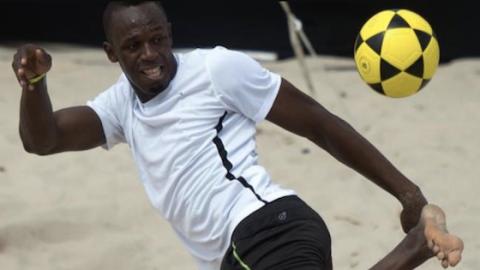 Is a pro contract soon in the cards for Usain Bolt? After tryouts for Dortmund and in South Africa, a new pro club has decided to give the fastest man alive the chance of a lifetime.

Since retiring as a sprinter, Usain Bolt has only one goal: to play football! His dream of turning pro in the most popular sport on Earth is perhaps about to come true. After tryouts for Dortmund and in South Africa, the world record holder in the 100m and 200m dash will train in Australia with the Central Coast Mariners who play at the bottom of the A-League table.

The Australian club’s plan is to test Bolt to determine if he has the talent to sign his first professional football contract. The Jamaican announced the news to his fans on Twitter: ‘Hi guys, it's Usain! I just wanted to say thanks to everyone at the Central Coast Mariners for giving me this opportunity to play professional football in A-League. I’m looking forward to the opportunity to prove that with hard work, anything is possible! I’m looking forward to it, and I’m going to come here and do my best! Watch out, I’m on the way and remember, I don’t take limits!’