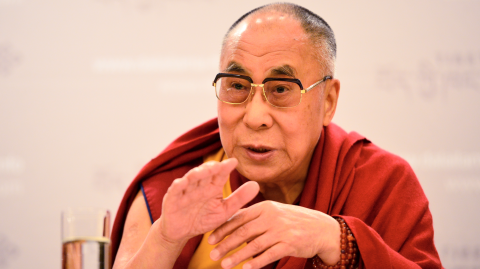 His Holiness the Dali Lama is doing something very special for his 85th birthday this July 6th. For the first time ever the Dali Lama will be reciting mantras and discussing topics of Buddhism expertly produced with background music focused on attracting multiple senses to the experience.

Junelle Kunin was inspired with the idea to create an album that fused the mantras and teachings of the Dali Lama with music when she was stressed out one day and looking for something similar but couldn't find a thing.

She initially proposed this idea to the office of the Dali Lama, however, she was rejected. This didn't get her hopes down though, as she often travels toIndia where she typically gets the chance to meet him. She decided to ask again, this time writing a letter and handing it off to one of the Dali Lama's assistants.

And Five Years later, the collaboration project 'Inner Wold' featuring numerous artists and His Holiness the Dali Lama is ready to be released on his 85th birthday, this July 6th.

During an interview Kunin spoke of the Dali Lama with regards to this exciting project:

I’d never heard him speak like this. He really was so excited ... he actually proceeded to explain to me how important music is, he leaned forward and his eyes were sparkling, and his fingers were rubbing together and he (talked) about how music can help people in a way that he can’t; it can transcend differences and return us to our true nature and our good heartedness.

She went on to explain that they have been working on the album the last 5 years and that it feels like the perfect and most relevant time to be releasing it now. Given everything that's been going on in the world.

Junelle actually wrote the piano part to a track on the album called 'Purification', while thinking about her mother who was hospitalized amidst the coronavirus outbreak. Her mother survived but just weeks later her nephew passed away, and they were unable to perform the proper burial traditions their family holds due to the COVID-19 restrictions. Devastated and separated she and her husband who co-produced the album managed to finish the project and dedicated it to their lost nephew Izyah Micah Toli.