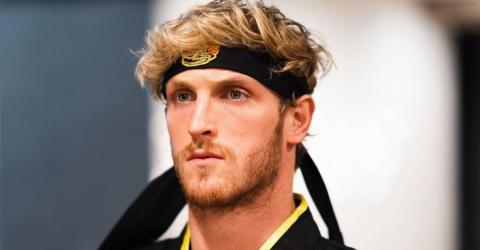 Controversial Youtuber and amateur boxer Logan Paul has got people talking once again with a dramatic makeover that’s left him unrecognisable. The internet celebrity has ditched his bleached blond locks for a full-on emo look that is so 2007 it hurts. And it’s safe to say it got a mixed reaction from his fans.

Logan Paul has always been a Marmite figure. The 24-year-old first found fame on Vine (RIP) back in 2013 and went on to form a Youtube channel entitled Logan Paul Vlogs. Today he’s got more than five million Twitter followers and over 17 million people follow him over on Instagram.

However, he was slammed in 2017 for uploading a video to Youtube which showed the dead body of a recent suicide victim in Japan’s Aokigahara forest. He’s also been criticised for sharing dangerous Youtube stunts such as taking part in the Tide Pod challenge and cruelty to animals in taking a fish out of a pond and tasering dead rats.

Logan captioned the photos: ‘it’s not just a phase mom [swipe]’ and ‘if you can’t beat em, join em’ and his fans went wild. Whilst fitness influencer Sommer Ray simply commented ‘yikes’, another commented ‘oh my lord i have officially been scarred for life’ and one fan wrote ‘The no beard is so upsetting to me 😢’.

The dramatic makeover came about after Logan received a wave of comments likening him to a viral picture of a ‘typical emo’ man, who bears a striking resemblance to the Youtuber. Never one to ignore the chance to make a buzz, Logan decided to rise to the challenge, telling his followers: ‘You’ve all seen the memes, but the emo man in this viral picture is actually not me… until today.’