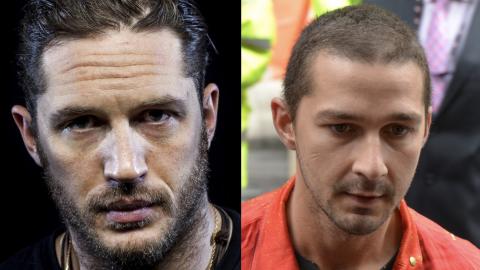 Tom Hardy and Shia LaBeouf had a rather complicated relationship during their time on set.

In 2012, during the filming of Lawless, Shia LaBeouf knocked Tom Hardy out cold. One would think that Hardy would carry a grudge against the American actor after doing so, but that’s not at all the case.

He explained to Esquire that he’s got nothing but respect for Shia and that he admires his work ethic. Shia LaBeouf, 31, had been drinking moonshine on set to get in character for his role in the film. He may very well have been drunk, as it the accepted reason as to why he would punch Tom Hardy.

‘A performer is asked to do two things: To be disciplined and accountable, communicative and a pleasure to work with. And then, within a split second, they’re asked to be a psychopath. Authentically. It takes a very strong human being to sustain a genuine sense of well-being through that baptism of fire. Drama is not known to attract stable types’, explains Hardy. ‘He knocked me out sparko. Out cold. He's a bad, bad boy. He is. He's quite intimidating as well’, admits the actor, before concluding, ‘he's a scary dude.’ Consider yourself warned!