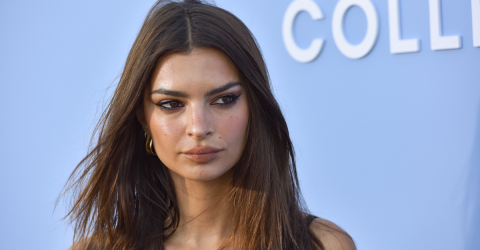 Summer isn't over yet for Emily Ratajkowski!

For several weeks, the American model had put her swimsuits away and stepped out wearing more fall-friendly outfits, such as a black suit or an oversized jacket paired with a turtleneck and raw denim jeans.

But recently, the young woman, who became famous after starring in the video for Robin Thicke's "Blurred Lines," treated herself to a beach day.

Last Tuesday, October 15, Emily Ratajkowski posted three pictures of herself wearing a one-piece swimsuit with a very low plunge neckline from her own brand, Inamorata.

In these photos, the 28-year-old is seen lying on a beach towel with a leopard-print bucket hat on her head. She expresses her love for hats in the caption under the post, however, what stands out most in her post is not her hat, but rather her very sexy outfit, which her 24.3 million followers certainly didn't scroll past.

Her post got more than 1.2 million likes in just 12 hours. In the comments, Emrata received a slew of compliments - as per usual - as well as many heart emojis, but some users had other things to say, like:

"Of course your hat is what we're supposed to be looking at here, ahaha",

"I was there too, but somehow didn't see you" or

"So, you're flashing your boobs to show us how much you 'love hats?' Nice try."

#emily ratajkowski
Contact
To ensure that we can best respond to your question, please choose your desired department
No connection
Check your settings