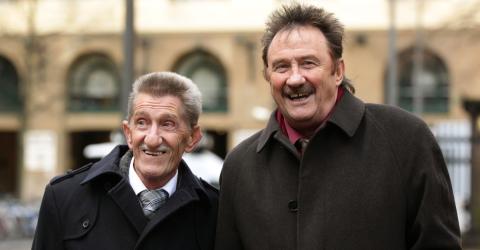 The British comedy legend passed away aged 73 on Sunday.

If you grew up in the UK you almost certainly remember the joys of sitting down to an episode of ChuckleVision starring the legendary Chuckle Brothers. For 300 episodes over 22 years, Paul and Barry had us all in stitches with their hilarious antics and their classic catchphrase, 'To me, to you.'

Sadly, Barry, the elder of the two Chuckle Brothers, passed away on Sunday 5th August 2018. He was 73 years old and passed away at home, surrounded by his loving family.

Barry and Paul's elder brother Brian, 83, has revealed that Barry had been suffering for the last year with a terminal heart condition. He told The Sun: 'We’ve known for a while Barry was very ill, I drove up this week and saw him for two hours. We knew the end was very near... Up until this last year he’d been fine. But he’s been a smoker all his life. It’s been very rough. Especially keeping it from people.’

Paul said in a statement: 'I’ve not just lost my brother, I’ve lost my theatrical partner of many, many years and my very best friend.'

The Elliott family have asked for privacy at this sad time.