Everyone knows that the King of Rock, Elvis Presley died back in 1977. But, conspiracies always lingered that Presley faked his own death to escape the fame. Too add to this, a new photo revealed from 1994 shows Elvis might have been alive 20 years after his 'death'. 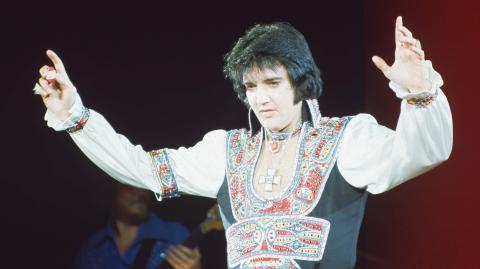 Just like all great musicians, there was a conspiracy that Elvis Presley's death was all a ruse so he could escape from fame and debt. Unfortunately, we all know this isn't the case and if Elvis did plan to fake his own death he surely wouldn't have planned for it to be on the toilet with his pants around his ankles.

After years of alcohol abuse, Presley's girlfriend Ginger Alden discovered the 42-year-old rock star dead after having a cardiac arrest on the toilet.

But of course, heartbroken fans always held out for the possibility that somewhere, Elvis was still alive. And, thanks to the Daily Star, theories of Elvis' secret life have been sparked again.

The publication recently posted a photo of a man in his 60's with dark hair, blue eyes and a chiselled jaw not unlike the King himself.

The photo was taken back in 1994 in Mejillonesm Northern Chile by Antofagasta who believes his co-worker at the time, Bill, was actually Elvis Presley.

According to Antofagasta, Bill worked with him for a few years before disappearing with 'no goodbyes, and no farewell party'. He stated:

I started to think he could be Elvis after I told a friend all the things I had seen and lived working for Bill. It started like a joke – saying that Bill could be Elvis living in the underground with a new identity.

The source claims that evidence of the conspiracy was piling up and stated that Bill had also the same broken little fingers as Elvis as well as the same mannerism of referring to people by their first initial.

But more than the look, [coworkers] were amazed for the voice. Bill just smiled chivalrously and said nothing. I never saw him commenting or making jokes about it.

Well.. we can only hope that Elvis is alive and well and chilling in South America with Jim Morrison, Tupac and Kurt Cobain.