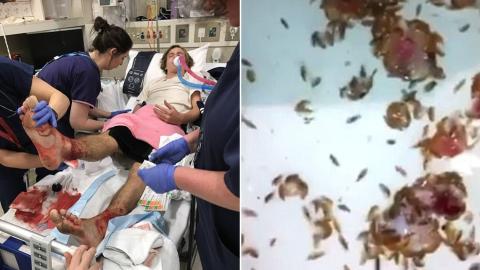 This simple swim almost ended in tragedy for one Australian man. He was just looking to cool off after the match... he certainly didn't expect to look down and see that much blood.

Sam Kanizay will not be going for another swim anytime soon. Returning from a football match and deciding to go for a quick evening swim, the young Australian immersed himself up to the waist at the beach in Brighton, a suburb of Melbourne.

After being in the water for 30 minutes, when leaving the young man realised he was bleeding profusely from the arms and legs. ‘The cold water numbed my legs, I felt what I thought was a tingling sensation, but maybe it wasn’t just a tingling,’ said the 16-year-old to local radio station 3AW. ‘It looked like hundreds of tiny needle holes, or pin-sized bites, all over my ankles and the tops of my feet.’

Despite taking a long shower, the blood did not stop flowing. Sam’s family then thought that he had been attacked by ‘sea lice.’ The young man was then taken to the hospital but according to him, the doctors could not determine the cause of his injuries.

His father returned to the scene of the crime and collected a sample of the small critters. He filmed their behaviour around pieces of meat and posted the video on YouTube.

‘They aren’t here to eat us, but they might take advantage of us like mosquitos, leeches, or other species found in the wild do,’ says Jeff Weir of the Dolphin Research Institute. What a way to get put off going for a swim!

Sam went on to make a full recovery, but we're sure he'll be double-checking the water next time before he dives in.

Check out the video above to see the critters in action!