A video of a South African diver getting swallowed by a whale went viral on Youtube amassing millions of views. The footage paints a harrowing picture but fortunately has a happy ending.

The video was taken off Port Elizabeth, South Africa. As you'll see in the video above, a diver was in the middle of a school of fish when a whale caught him, as he explains in the original video: "I had started filming dolphins, sharks, gannets, penguins and cormorants that were feeding on sardines when, from the depths, a Bryde's whale suddenly appeared, swallowing everything in its path."

In this testimony to AFP, Rainer Schimpf, an environmental advocate, recounted how he experienced this traumatic experience:

I felt some pressure around my waist, I immediately knew what was happening (...) It was only a few seconds before the whale realized its mistake and opened its mouth to spit me out.

Indeed, the diver was incredibly lucky and his wife, who witnessed the scene, is perfectly aware of that. Talk about a scene straight from Pinocchio come to life, right? 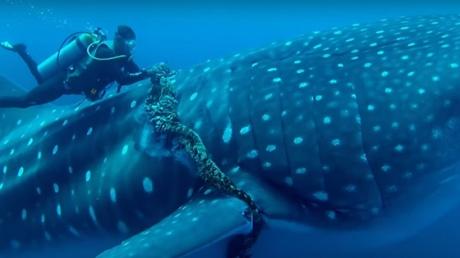 Divers Rescue A Whale Shark That Had Been Suffering For Years