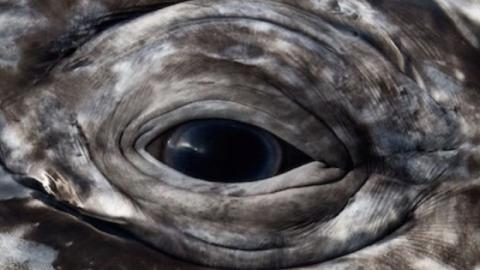 Scientists have managed to capture footage of a rare species of whale in the Canary Islands. Filmed in their natural habitat for the first time EVER, this groundbreaking find is sure to pave the way for more research and biological advances in the future.

Beaked whales are the second largest identified whale family nowadays, however we still don’t actually know a lot about them and this is also true for the True’s beaked whale (Mesoplodon mirus). Reported for the first time in 1913, this whale isn’t seen very often and has never been filmed, until now.

Scientists have managed to get footage of these animals in their natural habitat. The video was filmed by students just off the shores of the Azores islands and the Canary Islands located in the Atlantic Ocean and it shows three whales, young adults, moving freely in the waters. “When I saw the video, I just couldn’t believe it,” said marine biologist Natacha Aguila de Soto to The Washington Post.

“I thought, My God, these are True’s beaked whales,” said the scientist from the University of St Andrews in Scotland and the University of La Laguna in the Canary Islands. If you think her reaction was a bit much, keep in mind that the last study done on these beaked whales was nearly 15 years ago, and so this is even more exciting, especially since they are rarely spotted in their natural habitat.

Beaked whales live in deep waters, generally far from our coasts and according to specialists, they spend around 92% of their lives underwater and can dive up to three kilometres deep to find food. They only briefly surface and don’t do tricks like dolphins or some other whales.

These characteristics mean they are practically never seen by humans and therefore difficult to spot. They can also be different colours, which makes them even harder to identify. In other words, studying True’s beaked whales can be a very complex task. Because of specimens that have been washed up on shores, we know this species are primarily found in the North Atlantic and also in the Southern Hemisphere.

But despite them being washed up on shores, there is still not enough data that would say for sure that they inhabit other areas as well. But a new study published by Natacha Aguila de Soto and her colleagues in the journal Peer J, could mean we could learn more about this species. She has collected not only the video that was shot underwater but also photos of one very young whale and the precious data that we have from the whales that had washed up on shores.

Is the Species In Danger?

We now know about the different colouration of these whales thanks to this study and it also suggests that the Azores area would be crucial for doing further research. The genetic analysis carried out on the washed up specimens reveals that the northern population could possibly be made up of two different species.

But “it’s just a possibility,” Aguila de Soto points out, who hopes to launch a broader genetic study to investigate. With their hydrodynamic bodies, beaked whales seem remarkably well adapted to their underwater environment. “They overcome incredible physiological challenges to dive, but that means that they are very sensitive to anything that changes or challenges the physiological balance,” says the scientist.

Whilst the current situation of the Mesoplodon mirus is still relatively unknown, specialists are worried about the dangers that we in particular pose for the whales with our human activity. Last month, a Cuvier’s beaked whale was found in Norway, with 30 plastic bags in its stomach and noise pollution from the seabed is also a potential threat.

All this data “tells us how little we known about this family of elephant-sized mammals that inhabit the oceans,” concluded Natacha Aguilar de Soto who has agreed, with her colleagues, to continue researching these mysterious whales.