Olympic National Park, located in Washington State in the northwestern United States, is currently evacuating some of its goats. For reasons that, though they may seem amusing, are in reality much less so. 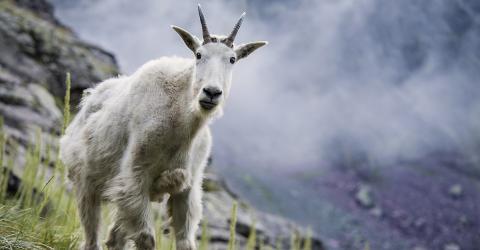 The mountain goats you may cross along your stroll through Olympic National Park will surely make you smile. A full white coat, a silly look in their eyes - all the accoutrements are put in place for you to want to caress them or even give a little treat. Except that this is when the problems begin.

These goats, imported into the park more than a century ago, have become completely dependent on salt and minerals. They lick anything that contains them - from the stones in their environment to the hands of sweaty tourists. Even worse, they do not hesitate to drink human urine or to come to the campsites to eat food and, for example, drink the water used for cooking.

‘Mountain goats can be a nuisance along paths and in campsites where they constantly search for salt and minerals contained in human urine and perspiration on clothing’, explains the management of the park on its website.

Even going so far as to attack humans

The idea of a goat coming to drink human urine can be taken as a joke. Except that in reality it is much less of a laughing matter - the animals do not hesitate to pursue tourists who try to avoid them. Case in point, a 63-year-old man was killed by an aggressive goat who allegedly stabbed him with its horn in 2010 while hiking with his wife and a friend.

The park tried several methods to curb this phenomenon. In the 1980s, 500 goats were transported to other forests. But without any natural predators, their numbers have increased again and they are now more than 600 in this 3000 square kilometer park. If no action is taken, the figure could reach a thousand in five years.

The Olympic National Park is not the only place where goats have become completely addicted to human salt over time - the same type of behavior has also appeared in another American park, the Montana Glacier National Park.

90% of the goat population of the park will be reallocated

The park authorities decided to transport the animals by air to another natural park a few dozen kilometers away, where the goat population has not been imported, as in the Olympic Peninsula, but where it has always existed, though it is currently in decline. The opportunity, therefore, to kill two birds with one stone.

The authorities hope to collect 90% of the goats from the Olympic Park. Half will be transferred to surrounding parks while others will be killed in an operation that will stretch between three to five years. The first goats released in the wild were equipped with GPS collars and, as the Seattle Times points out, 'they are happily galloping happily in the wild'.