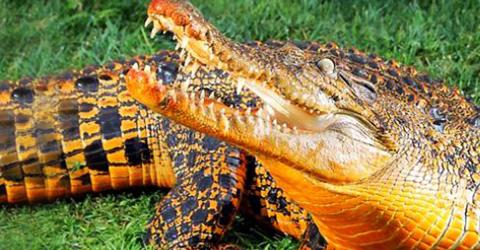 Crocodiles are evolving into a new species right in front of our eyes. These huge orange beasts that live in the caves of Gabon have developed DNA that is different from that of their surface-dwelling peers.

The Abanda cave is not a place you want to live unless you enjoy total obscurity, high temperatures, foul-smelling vapours and soil that is covered with a thick layer of guano (bat faeces). An environment that speleologists had to explore to uncover a treasure: a new species of crocodiles, hard proof of nature's adaptability.

"It looks like liquid mud," scientist Olivier Testa told National Geographic of the substance that covers the surface of the cave, "... but it's not mud." This pasty substance is guano. Tons and tons of guano mixed with the cave's water, forming a pool of bats faeces.

"It's a particularly demanding environment," says herpetologist Matthew Shirley. But the crocodiles that live there - a bright orange species that is almost blind and resembles the Osteolaemus tetraspis, their surface-dwelling cousins - don't seem to mind. According to the scientists, these crocodiles get their colour from guano, which they bathe in throughout their underground life.

"Bat guano is largely comprised of urea," says Shirley. "When they're sitting in this bat guano slushie, we think the highly basic pH water is tanning their skin." The cave crocodiles' diet is also different from other species': in the cave, they mainly feed on bats, whereas other crocodiles eat fish and shellfish.

But there's an even more striking difference between these two types of crocodiles that were originally the same species. According to Shirley, the cave population has developed its own genetic signature, which is different from that of Osteolaemus tetraspis. To confirm this hypothesis, the team collected blood samples from about 40 underground crocodiles and 200 from those living in broad daylight.

The results of the genetic analysis revealed that orange crocodiles were endowed with a unique haplotype, a group of genes that are close to each other on the same chromosome and are passed down together. These genetically linked alleles suggest that cave crocodiles areprogressively becoming genetically distinct from surface-dwelling crocodiles.

The team's article is still under review. "As a result of that isolation and the fact that few individuals come in or go out, they're in the process of [becoming] a new species," says Shirley."Whether that happens soon or not is anyone's guess." It remains to be seen how these animals reproduce.

Too big to get out

The smaller crocodiles can easily venture outside of the caves. But it looks like the larger ones are actually unable to get out. So, they have two options: they can either stop reproducing altogether or nest inside the caves - a case that, so far, has never been documented. Crocodiles generally need vegetation for their eggs, a resource that is unavailable in the depths of the underground habitat.

Shirley believes that with every passing generation, crocodiles come from outside to help their orange counterparts reproduce, but how they do it remains a mystery. This recruitment would help sustain genetic diversity and avoid consanguinity. In addition to giving us an idea of how new species emerge, the study of these crocodiles will give us insight into how animals adapt to particularly inhospitable environments.

#environnement
Contact
To ensure that we can best respond to your question, please choose your desired department
No connection
Check your settings