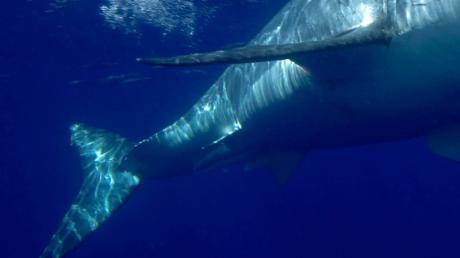 A young Australian man went out one morning to catch sharks off the Bermagui coast, South of New Wales. He thought he'd gotten lucky when, based on how heavy his net was, he caught what he thought was a large shark.

What he didn't know was that the shark had already been caught before that... by a much larger animal, judging by the bite mark on the shark's head.

When you see the picture of the headless shark, you might wonder... what kind of sea monster feasted on the shark's head?

Jason, our young fisherman, posted the photo on social networks for experts from around the world to give him their opinion.

Participants in the debate came up with three possible options. One of them is the megalodon shark: a prehistoric creature that lived millions of years ago and of which only fossils have been found.

It is an enormous giant shark - 18m long (to give you an idea of how big that is, it's the equivalent of two buses). There are many theories that argue that the megalodon didn't go extinct and could be living in the most unexplored depths of the ocean.

Was this shark's head a megalodon's snack? Check out the video above and judge for yourself!