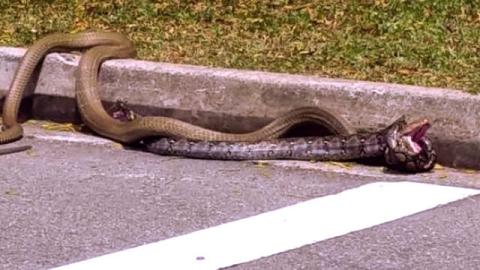 This king cobra fights against a python in front of a university. Fascinated students filmed the fight for social media and it quickly went viral.

The scene took place on the campus of Nanyang Technological University in Singapore as a king cobra faced off against apython. The ‘combat’ lasted several hours until the authorities managed to control andcapture thepython.

In the video, you see how a python and a cobra fight to the death for almost half an hour on the sidewalks of the university. The university itself alerted students through their Facebook account to avoid getting too close to the battling reptiles. This ended up having the opposite effect as students gathered around to watch the spectacle.

Eventually,thecobramanaged to escape and was missing for several hours. At around 10 pm the authorities managed to catch it and took it to a zoo.