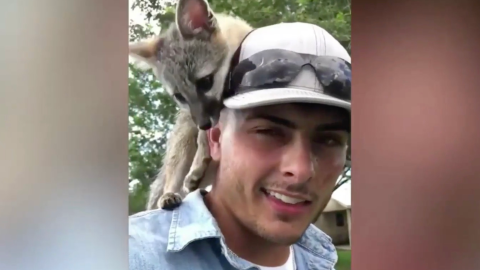 This viral YouTube video perfectly illustrates the complexity of the animal kingdom. A man who believed he was rescuing a puppy was shocked when he realized it was an entirely different animal after he took it home.

Unless you're an expert in the field, it's not uncommon to see an animal and not know what species it belongs to. Some creatures aren't always what we think they are!

As you'll see in the viral video uploaded by YouTube account Caters Clips, a man took a break from his job to rescue a defenceless animal.

In the short video, you can see him picking up the small animal with his hand, thinking it was a lost dog. The 21-year-old, who was identified as Malachi Forester, decided to take it home to take care of it.

He welcomed the 'puppy' into his home and even nicknamed him Fred, excited to have a new pet to run around and play with in his garden. But looks can be deceiving...

The small animal had been in his house for a few weeks when it started to take its true form... And it turned out to be a wild animal! A fox, to be precise.

The Internet can't get over how the young man has grown so attached to his fox, he lets it climb on his shoulder. The video already has over 25,000 views!