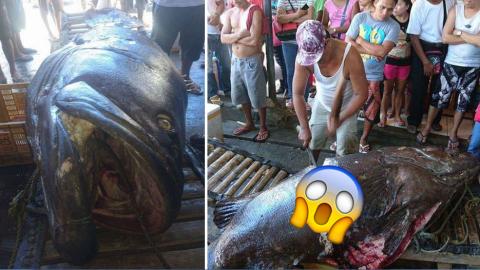 This Filipino fisherman was already impressed by the size of his catch, which was a fish weighing over 200 kilos, but this was not the only surprise.

Arnold Constantino won’t forget this outing at sea anytime soon. The young fisherman from Kalibo in the Philippines made a once in a lifetime catch a few days ago, a bass weighing 200 kilos.

Aided by his friends, Arnold quickly began to gut the colossal fish in order to sell it as quickly as possible. But after a few cuts with his machete, the fisherman came across a gold police badge!

‘We went straight to the market to see how much we could get for the fish, and when we opened it up we found the badge. Nobody knows how it got there,’ he told the Mirror.

‘We panicked a little when we discovered it. Had the fish attacked someone before? Or worse, did he eat someone? We don’t know.’

This find has remained a mystery. Meanwhile, Arnold, unfortunately, had to sell his fish at a reduced price because the discovery of the badge put many potential buyers off…

Check out the video above to see the incredible moment they made their discovery!