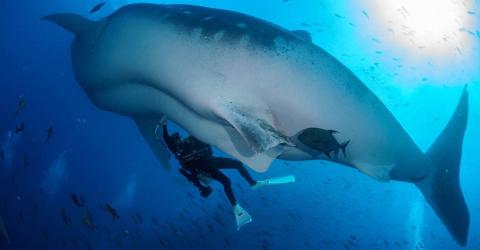 Off the Galapagos, marine biologists have for the first time examined whale sharks using underwater ultrasound. This is a major scientific advancement that should help to better understand the reproductive biology of these aquatic behemoths, which are seriously threatened with extinction.

It is always an emotional moment for future parents, the first ultrasound. The first meeting with the baby, whose arrival will be in only a few months. This is a routine examination in humans but ultrasound imaging techniques are much less common in the depths of the sea! And yet, marine biologists for the first time performed an ultrasound on an animal just as majestic as unknown, the whale shark.

‘These sharks are still one of the most enigmatic creatures on the planet,’ says marine biologist Simon Pierce from the Marine Megafauna Foundation in California. However, despite their size and their colossal mass, sometimes measuring over 65 feet and weighing 30 tons, whale sharks are extremely stealthy animals, they regularly dive to over 6000 feet deep.

Swimming not far from the abyss, these cartilaginous fish leave in their wake a great deal of mystery, and in particular on one point, that of their reproduction. Understanding how these giants give birth to their young is crucial, however, at a time when the species is severely threatened by a multitude of human activities, such as overfishing, shipping, underwater pollution, and offshore oil exploitation.

Placed on the list of endangered species by the International Union for the Conservation of Nature (IUCN), the whale shark, therefore, requires urgent protection measures. This is a particularly alarming situation, and so the team of marine biologists recently carried out their unprecedented underwater ultrasound experiment.

This experiment is the brainchild of a Japanese scientist, Rui Matsumoto, who recently developed a device for underwater ultrasound imaging. This imaging system was successfully tested on manta rays, zebra sharks and tawny sharks. But to extend this use to the behemoth whale sharks, there was still a long way to go…

The first step to take was to follow the movements of an animal which does not stay in one place. A challenge that scientists tackled by equipping their device with an underwater propulsion system. Another challenge they were faced with was posed by the thickness of the skin of the whale shark, which has no comparison with that of Man, it can be up to 10 inches thick! Under these conditions, it was difficult for the ultrasound to penetrate up to the maternal uterus. But the researchers were still able to use the imprecise images they managed to obtain.

Of the 21 or so females examined on a two-week expedition off Darwin Island in the Galapagos, scientists were able to detect ovarian follicles inside one of them; a cluster of cells containing the oocyte, and measuring, in this massive animal, up to 3 inches. Their presence may be the sign of either the beginning of the breeding period of the animal or the end of this cycle, announcing a potential early gestation.

Part of the mystery remains

In an attempt to determine the exact reproductive stage of the whale sharks they examined, the biologists also took blood samples from these giant fish in order to analyse the levels of six different steroid hormones. These are sexual indicators, the levels of which have not, for the time being, yet made it possible to precisely locate the reproductive stage of the females studied.

‘Even if we did not get the final answers that we were hoping for this year, it's a huge step forward,’ said one of Rui Matsumoto's colleagues on the expedition, Simon Pierce. ‘We know that these techniques work and can be implemented on location, and they are the best tools we have to solve this mystery,’ concludes the marine biologist.

A perspective shared by the one thanks to whom this underwater prowess was made possible, Rui Matsumoto: ‘These discoveries will be the first steps towards unveiling the mysterious reproductive biology of [whale sharks] in work to come.’ The first ultrasound, an emotional moment for future parents, but also, now, for marine biologists. 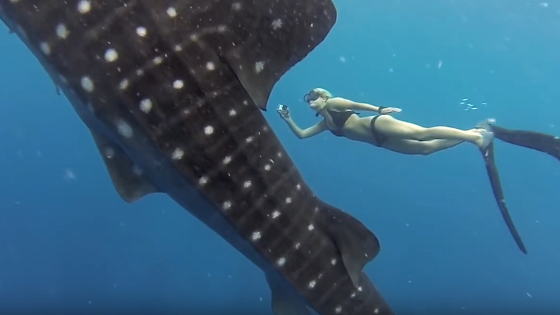