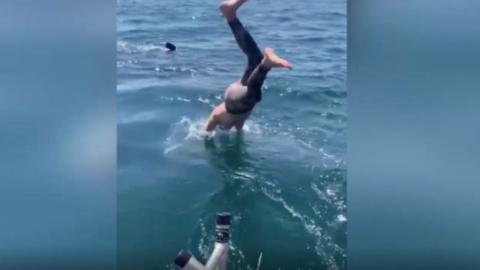 A video of a young man swimming with a shark recently went viral. The young man thought it was a harmless basking shark, but soon realized he was wrong.

The video was posted on TikTok by "rydersonthestorm" and it didn't take long to go viral and make headlines.

The intrepid young man jumped into the sea to swim with what he believed was a harmless basking shark, one of the largest species in the world and also the least threatening to humans, as they feed on plankton.

However, he was very unpleasantly surprised by what he saw once he was under the sea. He and his friend, who was filming, noticed it had a fin this species of shark doesn't have.

In the video, which you can see above this article, you can hear the friend telling him:

That's not a basking shark, dude. Get back on the boat!

A terrifying surprise that, luckily, didn't take a turn for the worst, as the boy managed to get on the boat in time.

It was actually another type of shark and one that is quite dangerous: a white shark. The friend who was filming was very amused by what happened, although it probably wasn't as entertaining for the protagonist.

Social media users shared the video on a number of platforms, where it went viral and has garnered thousands of comments and more than nine million views.

See for yourself in the video above.