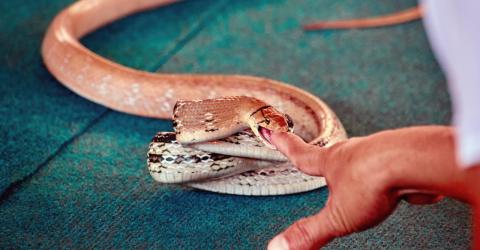 A man in China removed his own index finger after he was bitten by a snake thinking it was the regions infamous ‘hundred pacer’ snake.

This deadly snake has been given the name ‘Hundred Pacer’ because it is believed that the venom is so strong, you cannot walk more than 100 steps before dying.

So, the man’s reaction after he was bitten by what he thought was a very deadly snake, was not so surprising after all… Being 80 kilometres away from the nearest hospital, removing the appendage that was bitten must have seemed like the best way to stay alive.

The man, known only as Zhang headed to the hospital for treatment after removing his finger and wrapping his hand in cloth, leaving what he believed to be his no longer viable finger behind.

After arriving at the hospital Zhang told his doctor, 'I chopped it off to save my life,' and according to Fox News. The doctor then told him that it was completely unnecessary to remove the bitten digit.

As it turns out, the venom of the ‘hundred pacers’ isn’t actually as toxic as it’s believed to be. While it is dangerous and can definitely cause fatalities with common symptoms being severe bleeding, swelling, necrosis and heart palpitations, the reputation that this snake has, has been blown a bit out of proportion.

There is, in fact, an antivenom available and usually, patients will survive provided they’ve sought treatment for the wound within 6 hours of being bitten. If Zhang has brought his finger with him the doctor said they could have even reattached it.