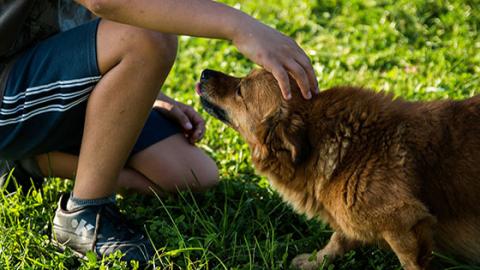 Archaeologists have discovered human graves in which are buried dogs, dating back more than 6,000 years. Buried with care, the canines followed the men into the next life.

6,000 years ago, dog was already man's best friend. Archaeologists have found dog skeletons in human graves. These remains, buried with care, had been voluntarily arranged near the human corpses, so that the dog accompanied his master into the afterlife.

Friends since the dawn of time

Archaeologists discovered about twenty tombs dating from the Neolithic era in Catalonia, near the current Spanish city of Barcelona. Dead bodies of adult dogs and puppies were found there. For researchers, this shows the presence of communities that were particularly attached to dogs.

Archaeological evidence from at least four sites has shown that these prehistoric men and their canines lived together, worked together, and shared the same diet of seeds and vegetables. These results were published in the Journal of Archaeological Science: Reports.

‘These animals were totally integrated into these Neolithic communities,’ Silvia Albizuri, a researcher at the University of Barcelona, ​​told AFP.

This is not the first time that dogs have been found in human graves: other Neolithic sites, in northern Italy and southern France, have been studied before for the presence of canine bones. According to scientists, dogs were first used to hunt. Then, after becoming sedentary, man began to cultivate the land about 10,000 years ago. The dog, then domesticated, became a protector against intruders and wild animals.

To stay with their masters, the dogs paid the price: the animals found in the tombs were probably sacrificed to accompany their masters in their graves. Archaeologists have deduced this after observing that many corpses were those of puppies, barely a year old.

The most likely hypothesis to explain these sacrifices would be that our ancestors were reluctant to sacrifice the older dogs because they helped guard the herds.