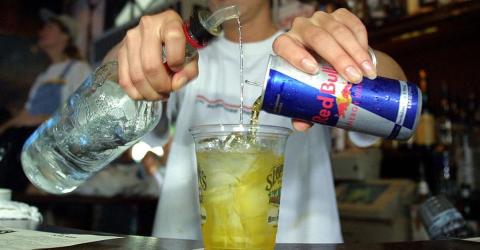 Even if you don’t fancy vodka or Red Bull, you’ve surely tried the combination of the two during a night out. When looking to combat fatigue as the night rages on, the mix of the energy drink and a shot or two of vodka is a potent one and will leave you absolutely wasted by the end. We’re sure it will surprise absolutely no one, but one Canadian study recently uncovered that – wait for it – the drink is not good for you.

Looks like it may be time to find a new go-to cocktail when out at the club. The Centre for Addictions Research in Victoria, British Columbia examined 13 various studies conducted between 1981 and 2016 which studied the effects of mixing alcohol and energy drinks. It turns out that adding vodka to your Red Bull for a bit of spice is not exactly great for your body - but not for the expected reason.

Rather than just sending your heart into overdrive when you indugle in this risky beverage, you're actually also more likely do something really stupid. The results published in the Journal of Studies on Drugs and Alcohol suggest that alcohol consumption in conjunction with energy drinks increase the risk of injury and falls when compared to alcohol alone. So more or less, you get a little more legless when mixing the two.

When we drink alcohol by itself, we’re hit with an immediate moment of euphoria which in turn is followed by fatigue. When we add our little friend Red Bull to the equation, we get that great moment at the beginning with none of the fatigue at the end – the energy drink effectively masks it. So we stupidly continue drinking as we’ve essentially quieted the reasonable part of our brain that’s telling us “listen mate, I think we should probably call it quits here”.

Audra Roemer, author of the study, states that this cocktail may cause a less than desirable “awake-drunk” state: “Usually when you're drinking alcohol, you get tired and you go home...people may underestimate how intoxicated they are, end up staying out later, consume more alcohol, and engage in risky behavior and more hazardous drinking practices.”

According to another study published in the science journal Plos One, this isn't the only risk-factor when it comes to drinking caffeinenated booze. In fact, the researchers at Purdue University in Indiana found that consuming alcohol-mixed energy drinks causes similar long-term effects on the brain as taking cocaine. After conducting the experiment on mice who were given the alcohol-energy drink concoction, the scientists find increased locomotor activity - an effect which is similarly reached after consuming cocaine: “It seems the two substances together push them over a limit that causes changes in their behaviour and changes the neurochemistry in their brains,” explains Richard van Rijn, assistant professor at the university, “We are clearly seeing effects of the combined drinks that we would not see if drinking one or the other.”